The last article focused on the issues faced by LGBT+ players over the last 30 years. In this article the emphasis moves to LGBT+ supporters with a specific spotlight on Hanwell Town, both past and present.

The following statistics are often quoted when talking about LGBT+ people involved in sport:

A couple of years on, are things still as bleak as these results imply?

Stonewall published some new research as rugby, judo and darts recently joined their annual Rainbow Laces campaign. The research found that 53% of people agreed we all have a responsibility to call out anti-LGBT+ abuse. Despite this however, only 25% of people said they would feel confident enough intervening when they hear such abuse.

In response, Stonewall have detailed a set of top tips of what people can do to help address this lack of confidence. The tips include how to identify abusive language, how to effectively challenge abuse and how to report homophobic incidents, both on and off the pitch.

The tips feature practical suggestions that everyone can take part in, for example:

The final article ‘Pride Takeaway for 2022/23’ will provide more detail about Kick It Out reporting tool.

Hanwell Town: The past

Although I’ve only been a Hanwell Town supporter since September 2021, I’m aware of a previous incident which involved an anti-LGBT+ slur aimed at a Hanwell player.

During the second half of an away match in November 2020, an opponent’s midfielder shouted several expletives including “faggot” at one of the Hanwell defenders. This was heard by both supporters and the referee.

The referee took a ‘zero tolerance’ approach and sent the midfielder off for an aggravated offence. The incident was included in the referees match report and the culprit received a hefty match ban.

Despite living in Hanwell since June 2008, I hadn’t heard about Hanwell Town until I got a message from my cousin back in the North-East. He’d been watching the BBC Look North news bulletin and had seen the segment about Gareth Chendlick completing a 100k run for the Sir Bobby Robson Foundation in March 2021.

Initially I purchased some Geordie themed merchandise from the Club shop for Father’s Day given my family are all Newcastle United supporters. However, I was still fairly apprehensive about physically coming along to a match.

Apart from the occasional match at Darlington FC, my home town team, I’d gradually stopped going to stadium matches around 2017. This was due to ongoing homophobic language I encountered, both aimed directly and indirectly, which gradually tarnished the match day experience for me. I’d therefore resorted to watching matches at home or in the local pub. I also questioned whether at age 46 did I really have the energy for another ‘coming out’ and dealing with any negative reactions from fellow supporters and/or players?

I eventually plucked up the courage to go along to a few matches:

These matches showed my concerns were unfounded and I’ve gradually become a regular fixture at Hanwell Town matches ever since.

During the season I’ve brought along numerous friends and family members. Five of the friends are gay and included three that had never previously been to a football match. They each commented afterwards about how welcome they were made to feel and they’ve all been back several times…even if it was only for the cheaper drinks! 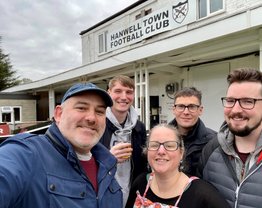 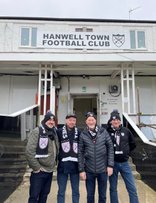 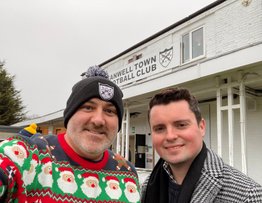 Unfortunately, it’s not been plain sailing all season and there have been a few minor incidents along the way. One occurred during an away match in March 2022 when three opposition supporters were continually shouting homophobic slurs at Hanwell players whenever there was a poor tackle. The slurs included “Queer”, “Poof”, “Homo” and “Fairy”. When I challenged use of such language I was told on several occasions “it’s football, it happens” and that more or less I had to get over it.

In the end, I reported the incident via the Kick It Out app but felt unable/unwelcome to come matches for a short period of time. I did however, return after receiving numerous messages of support from friends I’d made over the previous nine months.

Some real positives have come from this experience with the Club’s very visible LGBT+ support by:

The next, and final, article will highlight some of the activities planned for next season. 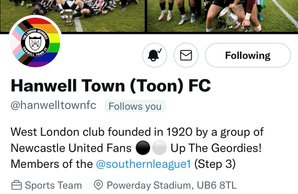 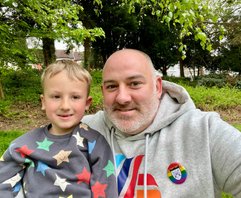