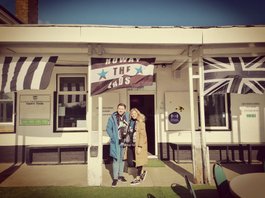 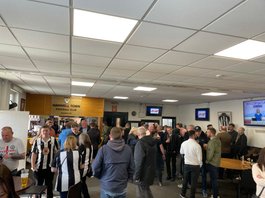 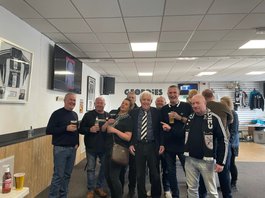 Picture the scene… a sunny Saturday morning, about 11am at the end of February. You’re sat on the veranda of your home non-league football club with a freshly poured pint. There’s five team flags newly hung around the club house and music lightly playing in the background. The view looking out over the pitch towards our new scoreboard is phenomenal, thanks to Nigel and Glyn.

A coach appears in the distance, then another and suddenly there’s three of them parked just outside the Powerday Stadium. Gradually the occupants alight and wander through the eastern Ray Duffy stand and up to join you at the bar to be served by Anthony, Nigel as well as Mr Duffy himself. Better still, they’re Newcastle United fans so it’s a sea of black and white stripes, the odd Brazilian flag and lots and lots of singing.

Thankfully it wasn’t a dream, it was last Saturday on what has become nicknamed Geordie Day. It was quite a contrast to the Saturday before where several of us were at the stadium from 9.30am making emergency repairs after the damage inflicted during Storm Eunice.

Newcastle were to play Brentford at the local Community Stadium later that day. The Powerday was therefore a temporary stop off for Newcastle fans after a long journey that commenced well before 6am.

Despite Hanwell playing away at Chalfont St Peter that day, the bar and kitchen were open to rejuvenate our fellow Geordies ahead of their match. Even the club shop got a hammering. Still it means less trips to the Post Office for our Marketing Manager, Elsa Jones - there was a total of 97 parcels shipped in the last week.

The atmosphere was hair raising - not that I’ve got much! Nathan, Charlie Pye and myself chatted to most groups of fans exchanging stories about both teams as well as several North-East towns. I think Whitley Bay was a recurring theme or maybe I was just stood next to Charlie too long.

David, our club President, was on hand to lead the welcoming committee and I think I even spotted him being a pot man/glass collector for the day. Bob, our club Chairman, was also at the ready and seemed to personally thank each and every Newcastle supporter for visiting as they left to head down the road to Brentford after 1.30pm.

The day provided the perfect opportunity for our club to meet some Newcastle United supporters, Hanwell’s very own big brother. Especially after their help in keeping the club fit and healthy during the recent pandemic by making innumerable purchases from the online club shop.

Overall a perfect day, particularly as both teams went on to win their respective matches. Hopefully it’s the first of many face to face visits between our two clubs and it's further cemented our 100 year relationship after being set up by Geordies in 1920. A Geordie will always get the warmest welcome at Hanwell !