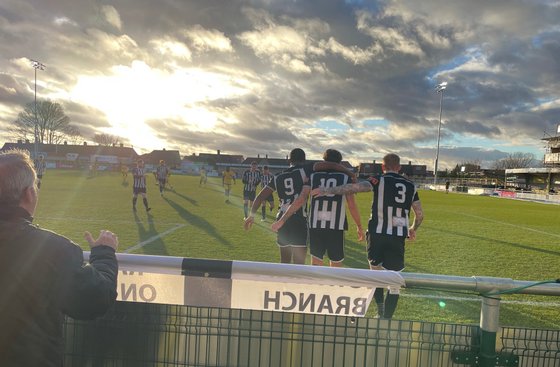 ‘Daylight robbery’ was the cry from the limited in number, but boundless in volume and opinion, home supporters at Gander Green Lane. To be fair, they had a point. Hanwell had started well with plenty of movement and possession and for ten minutes it looked as if there were three points for the taking against their relegation threatened opponents. However, the only chance of a goal had come when Ogo Obi had two close range efforts blocked.

The home side eventually got themselves together and looked to have some players Hanwell needed to be concerned about, particularly Yao Aziamale up front. With ten minutes gone Hugo Sobte did well to race off his line to just beat Aziamale to a defence splitting through ball. Seven minutes later it looked as if the striker had scored. His low shot, from an angle, beat Hugo but Dan Carr appeared from nowhere and back-heeled the ball off the line. Another seven minutes later Aziamale was flagged offside a he raced through to find the back of the net. Town’s only response was a long range effort from Sam Saunders that was easily saved by Filip Chalupniczak.
The home side had increasing amounts of possession as the half went on forcing Hanwell to concede a couple of free kicks not far outside the penalty area. Fortunately for Town both of Perry Iandolo’s efforts were just a little off target. The scares seemed to inspire Town for a while and, after some inter-play between Sam and Ogo, George Nicholas fired narrowly wide from outside the area. A corner then led to a goalmouth scramble that excited the Hanwell contingent in the crowd, but only led to a goal kick. Then, with less than five minutes to the interval Sam found Harry Rush who, in turn, slid the ball through to Tom Collins who put it past the advancing ‘keeper. The following minutes were Town’s best of the match with a long-range effort from Sam resulting in a corner, followed by Harry and Ogo combining twice, with each having a shot saved by Chalupniczak.

The second half saw the visitors on top with Town being the team looking to profit from a breakaway. A strong run from Tom raised the hopes of the Hanwell faithful but his shot was blocked. Then it was Ogo’s turn to break clear but the ‘keeper was out well to block. On the hour Rovers had a gilt-edged chance to grab a deserved equalizer but Anh-War Tran-West blasted high, wide and not very handsome when well placed to score. Five minutes later Hanwell could and should have scored but Ogo, Jack Hutchinson and Harry all had their shots charged down when a goal looked certain. The Rovers continued to have the greater share of the ball but created very little in the final third. Much of this was due to the solidity of the Town defence. Time and again Calum Duffy and Kyle Watkins in particular got up to win headers.

With five minutes to go Sutton substitute Jephte Tanga drove into the six yard box and pulled the ball back across the goal but Romario Jonas was on hand to turn the ball away for a corner. To their credit Hanwell were dealing well with the home side’s set pieces and Hugo Sobte was rarely called upon to show his abilities. Deep into time added on to ‘added-on time’ Andy O’Brien was sent on to help defend what looked likely to be the final dead ball kick into the Hanwell area. The home spectators did not think much of this alleged time-wasting strategy but the Town management had the last laugh as Andy seemed to be involved in clearing the ball to safety and the final whistle.

On the positive side Town had kept another clean sheet but on the negative side there were a number of unnecessary bookings. Supporters, who had made the reasonable in distance, but excruciatingly long in time, journey from Ealing to Sutton had been rewarded with seeing their team work hard to come away with three points. That other results saw Hanwell move up to third in the league was an added bonus that cheered the equally long, traffic jam filled return trek to West London.
TEAM: 1.Hugo Sobte 2.Dan Carr 3.Kyle Watkins 4.George Nicholas 5.Romario Jonas 6.Calum Duffy 7.Sam Saunders 8 Harry Rush © 9.Ogo Obi (16.Andy O’Brien 90+4)10.Tom Collins (12.Tomasz Siemienczuk 80) 11. Jack Hutchinson (Massimo Giamattei 67). Unused substitutes: 15.Dwayne Duncan 17.Callum Woodcock.