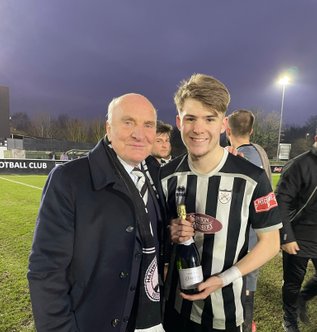 Despite the low temperature there was a decent-sized crowd in attendance at The Powerday to witness Hanwell earning a well-deserved three points against local rivals and fellow play-off contenders Uxbridge. Town came close to a dream start when Tom Collins was put through in the first minute. Despite being at a difficult angle he got his shot on target, but was thwarted by the legs of ‘keeper Tyler Tobin. Shortly afterwards Damian Pawlak, making his league debut for Town, was called into action, spreading himself to keep out Victor Osobu’s effort on goal. The following period of play was less than enthralling. The visitors had a lot of the ball but could not break down Hanwell’s impressive rear-guard. They did manage to win a number of corners but Town defended them well.

As the twenty minute mark approached home fans became excited when a low cross from Kyle Watson across the six yard box almost asked for someone to put it into the back of the net. Alas for Hanwell there were only red shirts on hand and it was cleared. However, it was not too long before Hanwell did go ahead. Jack Hutchinson found Dan Carr who played the ball into Tom well inside the Uxbridge area. It looked as though Tom would score but Tobin managed to scramble the ball off the line, but only as far as Harry Rush, who made no mistake from close range. The rest of the half was played mainly in midfield and the only excitement for Hanwell fans was when Dwayne Duncan headed a Sam Saunders free kick on to the roof of the net.

The second half proved to be much more entertaining than the first, with Town making a bright start, Tom winning the ball in the visitors’ third and finding the ubiquitous Harry. Unfortunately the skipper’s shot was easily saved by Tobin. Two minutes later Ogo Obi set up Tom to find the back of the net, but he was ruled offside. Shortly afterwards, in the fifty-third minute, Harry found Jack in space and the midfielder made no mistake. Ogo then went close but the difficult angle enabled Tobin to save readily.

Although Town were creating chance the visitors were on the ball a lot, but their final passes and crosses were cleared time and again by the impressive Geordie defence. Just after the hour mark a tremendous ball from Sam led to Dan eluding the full back and pulling the ball back across the box prior to being cleared. From the resulting corner an on-going goal-mouth scramble ensued and three times it looked as if the ball was about to cross the line, but it was somehow kept out. A corner followed, which was met by Dwayne, whose towering header shook the crossbar. Two minutes later Ogo shot into the side netting after good work by Sam and Dan.
Uxbridge then came back at Hanwell, and up the other end they had a great chance to pull one back, but Dan was on hand to bravely get his head in the way of a goal-bound header. Damian was then called upon to keep his clean sheet intact by saving from Oluwajuwon Akintunde. With five minutes to go Ogo burst clear of the Uxbridge defence but as he steadied himself to shoot Baboucar Jarra recovered well to make a saving tackle. The ball went quickly up to the other end, where Damian came out well to thwart Osobu. With just a minute of normal time to go, Harry, who was still chasing and hassling, played the ball to Ogo. The Hanwell number nine cut the ball back to Jack who made no mistake.

This was a good result for Town and it brought them to within a point of their vanquished opponents in the play-off race. It was satisfying and pleasing to see both the consecutive wins and clean sheet count rise to five since the defeat to the runaway league leaders, Bracknell.