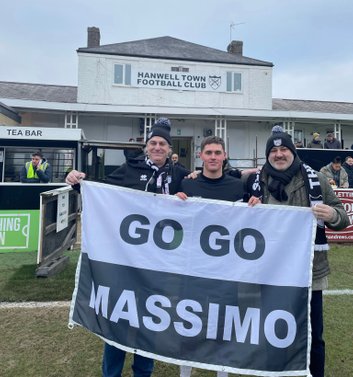 After twenty minutes many Hanwell supporters would have settled for a draw, but by the final whistle the single point gained was a most disappointing outcome. Marlow began on the front foot and after six minutes ended Town’s seven match run of ‘clean sheets’. Richie Whittingham’s free kick had reached Louis Rogers, whose shot was saved by Hugo Sobte, but the ball was played across the goal-mouth and Adam Richards was on hand to score from close range. After a quarter of an hour Hugo saved well from Marcus Mealing but a late flag would have ruled the goal out anyway.

Although the visitors dominated the possession and field position for the first half hour Hanwell’s rear-guard ensured that minimal goal chances were created. This scenario seems to be a pattern of late at The Powerday! The only really alarming moment came when the ball was bouncing around in the area following a corner, but Andy O’Brien managed to hook the ball over the heads of the throng of players and away to safety.

As has happened before, Hanwell came into the game increasingly in the latter minutes of the half. Skipper Harry Rush looked to have hit a goal bound shot from the edge of the area but the ball was deflected and saved easily by Simon Grant in the visitors’ goal. A surging run and cross by Kyle Watkins found Ogo Obi in the area. The number nine swivelled and shot but Grant saved again. As the half was coming to a close Hanwell made the half-time break much more enjoyable for the home fans by levelling the scores. A Harry Rush free kick was headed back across the six yard box by George Nicholas where it was put into the net by Tom Collins. All to play for!

Kicking towards ‘The Massive’ support in the Ray Duffy Stand Town started the second period much better than they had started the first, (as on Tuesday). Within ten minutes of the re-start Calum Duffy had gone close from distance while both he and Callum Woodcock raised the hopes of the Hanwell supporters with decent headers. Dan Carr was combining well with George down the right flank, but balls into the box were being defended well by the visitors. With fifteen minutes of normal time to play Marcus Mealing and Harry Rush were called over by the referee. After a long discussion involving the Assistant Referee both were shown yellow cards. Unfortunately for Mealing it was his second of the day and he had to leave the field of play. Almost immediately afterwards Dan hit a tremendous shot from thirty yards, but Grant saved well at full stretch.

The following period of play involved a lot of ‘non-play’. The visitors seemed to be suffering from a series of cramps that required treatment and at dead ball situations were taking a long time to re-start the game. In fact Grant was eventually yellow-carded for doing just that at a goal kick. Town were continually pressing, but after Ogo went close, headers from Harry and George were the nearest they came to scoring. To be fair to the referee he had been aware of the time-wasting and added on almost nine minutes at the end of the ninety. To conclude, it had not been a particularly entertaining game to watch, with far too many stoppages and very disappointingly two points had gone begging!