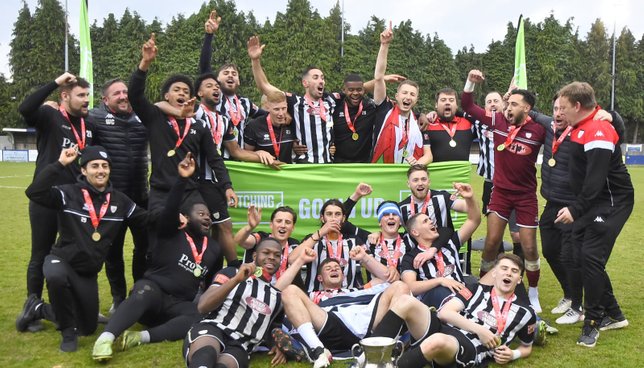 This was a game that had everything on and off the pitch! A crowd in excess of 1700 sang, shouted and drank to a degree that was far above the levels usually experienced at Step 4. In fact it was surprising that there were no ambulance call outs, be it for injuries on the field or cardiac arrests, anxiety attacks or even broken bones amongst the supporters (after the collapse of pitch-side wall).

The start of this all-important game was relatively quiet, especially when compared to the drama that was to come. Hanwell put a few passes together without threatening before Chertsey put Hugo under pressure with a deep corner. He got a fist to the ball but it needed a brave block by Dwayne Duncan to keep out the follow-up shot. Hugo was in action again a minute later but this time on the offensive. The first of his long range free kicks reached the head of Gareth Chendlik whose flick-on forced a save from Lewis Gallifent in the home goal. In fact Hugo’s accurate balls up-field were going to prove a continuing problem for Chertsey, and another was flicked on by Gareth to Ogo Obi whose cross was too deep to find a team mate.

With just ten minutes gone Hanwell looked to have a serious problem. A clash of heads in the area saw both Calum Duffy and Dwayne Duncan injured. Dwayne was recovered enough when play re-started to go close from another Hugo long ball. It took a while for Calum to return, and when he did he was wearing a head bandage that immediately re-kindled memories of Terry Butcher in Hanwell supporters of a certain vintage. The home side were having more possession than Hanwell, who, of necessity, were playing more on the break. With George Nicholas playing in front of them Hanwell’s defence looked very solid, restricting the Curfews to shots that did not really trouble Hugo.

In the thirty-second minute the Hanwell contingent were in dreamland. A Harry Rush corner was met by a thundering header from Dwayne and the Toon were in front. Minutes later, following a corner, a neat turn and cross by Calum saw Gallifent just beat Dwayne to the ball. However, Chertsey were still dominating the possession and Kyle Watson, Dan Carr and Dwayne all made vital interceptions in the box. Down the other end another flick on from Gareth reached Ogo whose goal bound shot was cleared off the line. The whistle was blown and the Hanwell contingent enjoyed their half time refreshments more than their hosts did.

The second half saw Hanwell start strongly. Dwayne got his head to yet another free kick but the offside flag was raised as play progressed. Ogo then produced one of his trademark dashes up the bye-line, pulling the ball back to Dernell Wynter. Alas, with the whole goal to shoot at, Dernell fired well over the bar. Consternation abounded on the terraces and in the main stand! Town continued to press for a second goal with both Ogo and the hardworking Jack Hutchinson having a couple of decent goal attempts apiece. Gareth also had a couple of efforts on goal without success.

Up the other end the Town central defence was coping admirably with the home side’s speedy forwards and a series of high balls into the box. Scott Davies was sent on to assume a more defensive role than Dernell, whom he replaced, and he did to good effect. In the 93rd. minute Hugo leapt to catch a threatening cross and Hanwell breathed a sigh of relief, but back came Chertsey. With half a minute to go Gareth cleared the ball up-field, but it came straight back. The ball was played into the Hanwell area and no Hanwell boot was able to get to it. It bobbled in front of Ashley Lodge and he put it into the net to wild scenes on the pitch and on the terraces. What a blow for Town! The full time whistle was blown and extra time beckoned.

Obviously Chertsey started the third period with their tails up after their dramatic, late, late equalizer. Lewis Driver dribbled worryingly at the Hanwell defence but was thwarted before Bryan Taylor seized upon a half clearance to drive the ball into the net to put the home side in front.

To their credit Hanwell got on the front foot immediately. Harry and Ogo combined for the latter to blast the ball over from a very difficult angle. The eighth minute of the half saw Tom Collins come on for Gareth and then, to everyone’s horror, Kyle tripped an opponent in full flight and was shown a second yellow card. Many Hanwell heads dropped in the crowd but not on the pitch. Harry had a good chance to level things before Tom actually did. Through on goal his shot was saved but the ball bounced back to him at head height. He promptly nodded it over the sprawling ‘keeper. Cue mayhem! The aforementioned Tom pulled off his shirt and whirled it over his head. He then raced down the touchline where supporters and players rushed to congratulate him. Unfortunately, and alarmingly, the wall against which the Hanwell fans were leaning collapsed, injuring players and spectators alike. After a lengthy delay the game resumed with some lacerated legs and bruised bodies, particularly amongst the spectators.

With the game all square the odds still favoured the home side with the extra man but Hanwell were up for the challenge. Harry played in Ogo who fired narrowly wide from a difficult angle before Driver failed with a similar chance up the other end. A minute later Tom found Ogo in a more central position. This time Ogo flicked the ball past Gallifent and it just made it into the goal before a Chertsey defender could clear it. Great celebrations ensued on and off the pitch. The final five minutes were agony for the Hanwell faithful.  Andy O’Brien replaced Ogo to shore up the defence as Chertsey pressed for another dramatic equalizer. Calum’s bandaged head cleared a couple of dangerous crosses and Hugo made a wonderful full length diving save to deny a certain goal. A couple of times Jack did particularly well by dribbling the ball out of defence rather than just clearing it. Dwayne got in one last timely interception and Hugo made a final catch before the whistle was blown and Hanwell were up!

The final whistle was a signal for substitutes, management, supporters and committee members to race on to the field to celebrate with the players. Others, perhaps less agile and fleet of foot than they used to be made their way less speedily on to the playing surface where they joined in the singing and cheering with no less enthusiasm!