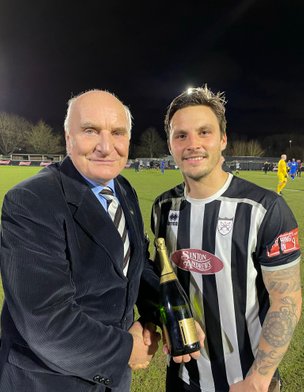 After an extremely disappointing first half performance against our mid-table opponents, Hanwell played with much more energy and desire in the second period to eventually run out worthy winners. At half time Town supporters readily acknowledged that Ashford had been the better team and it was only thanks to yet another solid defensive display that honours were even at the break. Ashford had started the better and Hugo Sobte was called into action twice ‘early doors’. Firstly he did well to get a fist to a threatening cross despite an aerial challenge. A minute later he was at full stretch to divert a low shot from Siao Blackwood round the post. It was then Calum Duffy’s turn to be involved in keeping out the visitors, getting his head to a dangerous cross from Ethan Hellyer.

Just after the quarter hour mark Town eventually put a good move together but Tom Collins was ruled offside as he tapped in. Ashford were playing with great energy, preventing Town from settling on the ball, and having the better of the possession and goal threat. The speedy Kain Adam looked particularly problematical down the right flank and Kyle Watkins did well to minimise the threat he presented.

As the game passed the half hour mark Hanwell began to gain more possession and play in the opposition half. A good chance to snatch an undeserved lead went begging when a thoughtful throw from Dan Carr set Massimo Giamattei up on his favoured left foot but he fired wide. As the half was coming to a close Hanwell conceded a free kick just outside the area, which has become a worrying trend recently. Fortunately for Town Connor Holland shot well over the bar.

Hanwell began the second half well and a good move set up Harry Rush almost immediately but his shot was easily saved. Five minutes later Ogo Obi was tripped five yards outside the area. The ensuing free kick from Sam Saunders rattled the crossbar and bounced away. Almost immediately Harry was fouled just outside the area to the right of the goal. This time, with Sam in close attendance, Massimo took it, forcing a full length dive from Paul McCarthy in the Ashford goal. From the resultant corner Town went in front, the in-swinging ball from Sam evading everyone and going in at the far post. Soon afterwards a scramble, following another corner, almost led to a second goal but the ball was put out for yet another corner. Hanwell were on top now, battling for and winning a lot of ball in mid-field, and, unlike in the first half, not giving it straight back. Typically Harry won the ball to set up Ogo but his shot lacked power. With less than twenty minutes to play Kyle made one of the storming runs down the left flank, so reminiscent of his first spell at the club. He pulled the ball back to Tom, whose effort was cleared only as far as Ogo whose shot was handled in the box. Tom made no mistake with the resultant penalty, clipping the ball high into the net.

With a two goal margin and some good players on the bench Hanwell were able to bring on a substitute or two, and many of the Hanwell faithful were pleased to see the appearance of Adam Laaref. He did not disappoint. Within a couple of minutes he showed great close control to go past two defenders in the area before being tripped. Almost unbelievably the referee waved ‘play on’. With three minutes to go Hanwell made the game completely safe through Ogo. There was still time for another eye-catching dribble by Adam before the final whistle, but his pull back from the bye-line was put out for a corner.

The victory was Town’s seventh in a row, all with clean sheets, and meant that they maintained third spot in the league. The second half of this game was so much better than the first, and indeed better than the whole game at Sutton. Was it because Ashford’s relentless pressing for the first half hour left them lacking in energy or had there been a ‘hair-dryer’ harangue at half-time or was it an unknown factor that led to Town’s rewarding second half performance? Anyway, Saturday will be a very stern test for Town against highly placed Marlow.