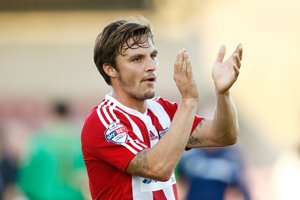 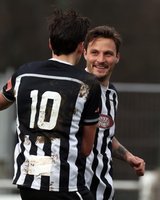 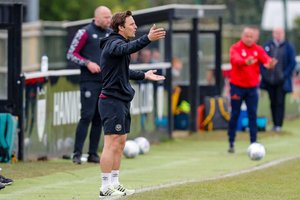 Every Brentford fan has heard of Sam Saunders, having spent eight seasons at the club, making over 200 league and cup appearances, scoring 30 goals. Bees fans may not, however, have heard of his return to football, after a brief spell away. You can watch him live, this Saturday, on Non-League Day (details at the bottom).

The skilful attacking midfielder announced his retirement from professional football in June 2019, but now plays for eighth tier Hanwell Town, after a short spell with non-league Richmond & Kew. His quality on the pitch is all to clear to see, with 5 goals in 12 games, and several standout performances. I spoke with him, to discuss his move, and asked Hanwell Town’s Marketing Manager, Elsa Jones, about the impact he’s had on the club.

Saunders joined Conference Premier club Dagenham & Redbridge in 2005, but endured an injury disrupted start to his career. After his debut in 2006, he became a regular in the first team for the remainder of the season.

Saunders was virtually ever-present during Dagenham’s historic 2006/07 season, making 43 appearances as they won promotion as champions. Sam regards his Conference winning medal is his favourite, as it allowed him ‘to play in the Football League’, making him a professional footballer.

14 goals in 45 appearances during a successful 2008/09 season, earned him a move to Brentford in the summer of 2009. Saunders signed a three-year contract at the League One club, and played 30 times during his debut season.

A difficult 2010/11 season was sugar-coated by a goal in a Football League Trophy semi-final, but Brentford’s subsequent Wembley appearance ended in defeat to Carlisle United. Another Wembley defeat followed for Saunders two years later, as he appeared off the bench in the 2013 League One play-off Final.

Automatic promotion was won a year later, but Saunders was sidelined for the second half of the season. Even so, he scored 5 goals in 17 appearances, also leading the team in assists, with 7. Perhaps unsurprisingly, Sam Saunders regards ‘Three Wembley appearances and promotion to the Championship’ as his career highlights.

But Saunders’ time in England’s Second Division was far from plain sailing, just like his footballing career. Injuries plagued a clearly talented player, and it took several short-term contract extensions to keep him at Brentford. Saunders was a far better player than his 5 Championship goals suggest. His moments of magic, persistence, and dedication to the club earned him a place in the Brentford Hall of Fame in May 2017.

Spells at Wycombe Wanderers and Colchester United followed, before his return to non-league, but why Hanwell Town? Saunders told me that ‘Mooro [Chris Moore, joint manager] was a big reason, and I’ve been retired for two years, but felt it was a waste not playing whilst I still could’.

He is currently a full-time assistant coach of the Brentford B team, which he balances with Hanwell matches. However, he was in the dugout when Hanwell played Brentford B in January, not playing, showing his real plans for the future!

Hanwell Town’s Marketing Manager, Elsa Jones outlined how ‘Saunds has had a huge impact on the club. He’s brought with him a wealth of invaluable experience which has helped all the players. He’s a real leader on the pitch, always communicating and guiding’.

Following Hanwell Town’s recent Twitter growth, going from 8,880 to 19,000 followers in 4 days, the signing of Sam Saunders has brought yet more attention to the ‘London Geordies’.

‘It’s also helped attract Brentford fans, who doesn’t want to see Super Sammy Saunders?! We’re very lucky to have him at the club!’.

Non-League Day is returning for the first time since 2019, this Saturday 26th March. The international break will mean thousands of football fans will miss out on their weekly dose of live football. So why not come down to Hanwell Town vs Westfield on Saturday instead. Check out the Hanwell Town Twitter for details, and U18s go free! There’s a high chance Sammy Saunders will be there too, of course!